The 2022 Re-Norming of the Reiss Motivation Profile®

This report describes a statistical analysis of data collected from the Reiss Motivation Profile® (RMP), a standardized psychological test developed by Professor Steven Reiss. The RMP identifies 16 life motives or basic desires, which are goals common to everyone. Everyone is motivated by these 16 basic desires, but individuals prioritize them differently. How an individual prioritizes the basic desires determines the person’s values, influences the development of personality traits, and predicts behavior in real-life contexts. Professor Reiss’s theory of motivation has been applied to leadership training and conflict resolution in business, assessing motivational reasons for academic underachievement, advising students on college and career choices, enabling athletes to achieve peak performance through understanding their tendencies under the stress of competition, and identifying the value differences that underlie chronic conflicts in relationships.

The RMP’s initial norms from 2007 included approximately 7,800 respondents and were based on a universal set of metrics standardized across both genders as well as all countries and age groups. A re-norming of the RMP completed in 2012, which included about 45,000 respondents, continued to support the use of a universal set of metrics. In 2017 a second re-norming based on data collected from approximately 80,000 test takers revealed significant differences between females and males on five of the basic desires, thus leading to the implementation of gender norms. Separate country norms also were developed for those nations with sufficient data to allow for statistically valid comparisons.

The current statistical analysis addressed four issues: We reexamined the need for separate gender norms and for separate country norms. We investigated again whether or not RMP scores vary systematically by the age of the respondent, and we explored possible motivational differences across generations.

The current data not only continue to support the use of separate gender and country norms but also reaffirm that separate age norms are not necessary. Further, the current data indicate the need for separate norms for Generation Z.

The current statistical procedures were similar to those adopted during the re-norming conducted in 2017. When analyzing possible differences between genders and across countries and generations, we used a two-sample z-test to compare two means, and we confirmed those results with nonparametric statistical methods.

In our exploration of the possible impact of age on a respondent’s RMP scores, we used a regression analysis model with an R-squared value as the measure of effect.

Issue 1: Do the current data continue to identify significant differences in life motives across gender?

The current data analysis reaffirmed the findings of the re-norming conducted in 2017 with regard to gender differences in RMP scores. As shown in Table 1, females and males share similar motivational profiles for the basic desires of Curiosity, Eating, Family, Honor, Idealism, Independence, Order, Saving, Social Contact, Status, Tranquility, and Vengeance. For five basic desires, however, the mean RMP scores for females and males differed significantly. On average, women scored significantly higher than men for Acceptance and Beauty, while men scored significantly higher than women for Physical Activity, Power, and Romance. In other words, females generally attach greater importance to the needs for self-affirmation and aesthetic experiences. Males, on the other hand, generally place greater importance on the needs for physical exercise, achievement, and sex. 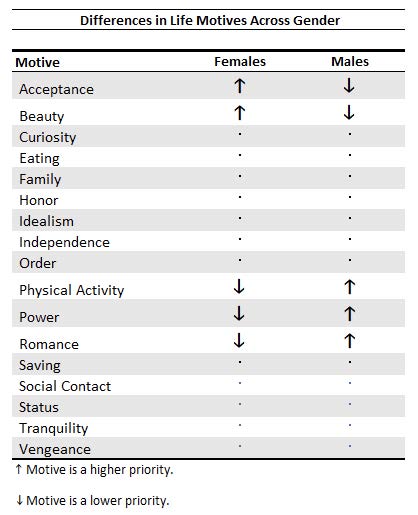 It should be noted that the current findings replicate the gender differences identified five years ago. That is, we have identified the same five basic desires – Acceptance, Beauty, Physical Activity, Power, Romance – as differentiating the motivational profiles of males and females. The stability of these findings provides further evidence for the validity of the RMP as a scientific measure of life motives.

Issue 2: Do the current data continue to identify differences in life motives across countries?

Given the importance of the demographic variable of gender for accurate interpretation of an individual’s RMP scores, we reexamined possible differences in motivation priorities only in those countries with a minimum of 900 female test takers and 900 male test takers. Seven countries met this criterion: Austria, Finland, Germany, Poland, Switzerland, Taiwan, and the USA. As shown in Table 2, the current data analysis revealed some significant differences for five of these seven countries.

For some basic desires, females and males within a country scored similarly. For example, compared to the global norms, both females and males who claimed Poland as their country of residence scored significantly higher, on average, for the basic desires of Honor and Tranquility. Thus, both women and men in Poland place higher value on character and safety than does the overall population of RMP respondents.

For other basic desires, females and males within a country scored differently. In comparing residents of Switzerland to the global RMP population, we found that females, but not males, scored significantly lower, on average, for the basic desire of Status. Thus, while men in Switzerland attach average importance to the need for respect based on social standing, Swiss women place lower value on the desire for social standing.

For two countries – Austria and Germany, we found no significant differences between the respondents’ scores on the basic desires and those of the global population.

For another two countries – Switzerland and the USA, differences were identified on only one motive and only for females. On average, women in Switzerland scored significantly lower for the basic desire of Status, while women in the USA scored significantly higher for the basic desire of Honor, compared to the global female norms.

The scores of respondents from Poland differed significantly from those of the RMP global population on two motives. As noted above, females and males who claimed Poland as their country of residence scored as having a strong need for the basic desires of Honor and Tranquility.

Residents of Taiwan also differed significantly from the global population on seven motives. Both females and males scored significantly higher, on average, for Tranquility. In general, females scored significantly lower for the basic desires of Physical Activity and Social Contact. The scores of males, though, were significantly higher, on average, for Acceptance, Beauty, Idealism, and Saving. These results indicate women and men in Taiwan attach similar importance to the need for safety but dissimilar importance to the needs for physical fitness, peer companionship, self-affirmation, aesthetic experiences, social justice, and collecting.

Issue 3: Do the current data demonstrate a correlation between RMP scores and age of the respondent?

The original norming process as well as the two previous re-normings of the RMP did not demonstrate a relationship between age of a respondent and a given motive. With the addition of about 55,000 new test takers since 2017, we decided to reexamine the issue of whether or not a correlation exists between RMP scores and age.

Using regression analysis, we created a statistical model with motive serving as the response variable and age serving as the explanatory variable. An R-squared value less than 0.3 is generally considered a very weak effect, whereas an R-squared value greater than 0.7 is generally considered a strong effect size. For each of the motives assessed by the RMP, we found no R-squared value larger than 0.02. Thus, we concluded that age is not a good linear predictor of how a respondent will score on any of the basic desires.

Issue 4: Do the current data reveal significant differences in life motives across generations?

Given the low numbers of respondents from the WW II and Post War generations, our analysis focused only on the five generations with sufficient data for meaningful comparisons: Boomers I, Boomers II, Generation X, Millennials, and Generation Z.

As shown in Table 3, we found no significant differences for any of the motives between the average scores of Boomers I, Boomers II, Generation X, and Millennials. The findings suggest individuals from these generations generally share similar values. 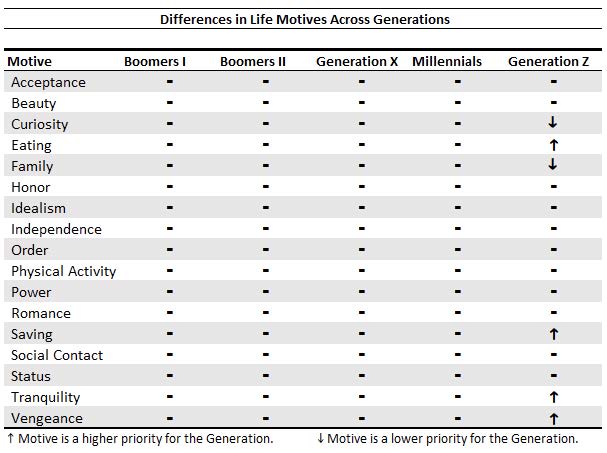 For Generation Z, however, we identified six motives that differentiate this generation from the other four generations: Curiosity, Eating, Family, Saving, Tranquility, and Vengeance. Compared to earlier generations, GenZers scored significantly higher, on average, for the basic desires of Eating, Saving, Tranquility, and Vengeance. They also scored significantly lower, on average, for Curiosity and Family. These results indicate GenZers attach greater importance to the needs for food, collecting, safety, and revenge while attaching lower importance to the needs for intellectual thought and family life, as compared to individuals from four previous generations.

Although respondents from Generation Z were residents of a number of different countries, most of them were concentrated in only five nations: Curacao, Finland, Poland, Singapore, and the USA. Given the extremely unbalanced numbers, we could not undertake a valid analysis of possible differences across countries. It is important to note, though, that the differences in motives between Generation Z and earlier generations are not limited to one country or one culture.

We then explored the possibility that the global pandemic caused by COVID-19 may have had an unusually severe impact on individuals from Generation Z. With relatively limited life experiences, GenZers may be less resilient – that is, less able to cope with the deleterious effects of the pandemic. This hypothesis, however, was not supported by the data, as we found that the scores of GenZers who completed the RMP before March 2020 were not significantly different from the scores of those who took the test after that date. Thus, the global pandemic is not a likely explanation for the current results.

The statistical analysis of data gathered on 135,807 test takers who completed the RMP between 2002 and 2021 revealed differences across gender, country, and generations. In other words, an individual’s gender, country of residence, and generational cohort can provide a different perspective on which of the life motives are most important to the person. Therefore, the RMP will continue to have separate norms for females and males as well as separate norms for countries with sufficient numbers of test takers. For the first time, moreover, the RMP will include a separate norm for respondents who are members of Generation Z.

How to Motivate Someone

It makes no sense to try to motivate another individual by appealing to values h...

Mieczyslaw Morawski and Lidia Jablonowska-Luba from Warsaw University of Technol...

Learn about
The Science of Motivation®

Subscribe to receive news about the Reiss Motivation Profile®.