How Do Elite Athletes Differ from the General Population?

David Laughlin, Ph.D. and Rainer Meisterjahn, Ph.D. of Courtex Performance (www.CourtexPerformance.com) used the Reiss Motivation Profile® for Sports to assess 152 elite basketball players.  These players included professional athletes from National Basketball Association (NBA) teams as well as college and international players likely to be drafted by NBA teams.  Based on a comparison of these players’ RMP scores with those from IDS’s database of 79,888 individuals from all walks of life, we were able to identify how elite athletes differ motivationally from the general population.

The Results
Table 1 shows the differences in means between the elite players and the general population for each of the 16 basic desires.  For the desires listed in uppercase letters, the means were found to be statistically significant to a .05 level based on a distribution-free rank sum test (Wilcoxon, Mann, and Whitney). 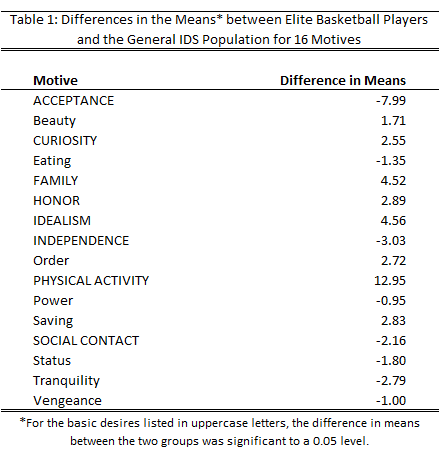 Not surprisingly, Physical Activity was the motive that most strongly discriminated the elite basketball players from the general population.  The players’ average score for Physical Activity was 12.95 points higher than the average score for the general population, thus indicating that the athletes enjoy and value muscle exercise much more than does a typical individual.

The motive of Acceptance also strongly discriminated the two groups.  Compared to the general population, on average the athletes scored 7.99 points lower for Acceptance, which suggests that the elite players are much more self-confident than is a typical individual.

Compared to the general population, the elite players had significantly higher average scores on Idealism, Family, Honor, and Curiosity as well as significantly lower average scores for Independence and Social Contact.  Given that basketball is a team sport, it makes sense that elite basketball players express a weak need for the motive of Independence.  Rather than seeking a high level of self-reliance, these players value being able to depend on others.  In basketball jargon, they are comfortable passing the ball to the open player, trusting him to make the shot. 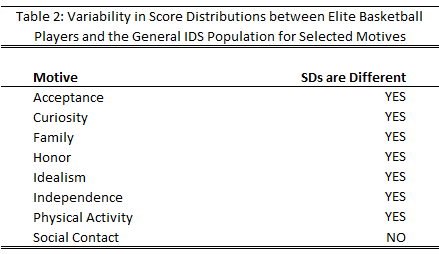 The greater uniformity in scores among elite players was true for all of the motives that discriminated the athletes from the general population with the exception of Social Contact.  In other words, for all but one of the motives that discriminated the two groups, the players’ scores were tightly bunched around the mean.  The importance of this finding is that a player whose score does not fall within the narrow distribution of scores for a given motive will be much more of an outlier.  For example, if a player scores as having a weak need for Family, that player will be viewed as different by most of the other players on the team.

Application
Coaches of professional and college basketball teams may want to use the RMP for Sports to assess their players’ motives for the purpose of determining the culture of their team.  Knowing who is an outlier with regard to what most players value can be helpful in identifying, understanding, and resolving possible conflicts that may arise with an athlete whose motivational profile is considerably different from the majority of his teammates.

The 2022 Re-Norming of the Reiss Motivation Profile®

How to Motivate Someone

It makes no sense to try to motivate another individual by appealing to values h...

Learn about
The Science of Motivation®

Subscribe to receive news about the Reiss Motivation Profile®.